The Shiba Inu is the smallest of the six original and distinct breeds of dog from Japan.

A small, agile dog that copes very well with mountainous terrain, the Shiba Inu was originally bred for hunting. It is similar in appearance to the Akita, though much smaller in stature. It is one of the few ancient dog breeds still in existence in the world today. 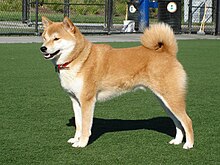 Inu is the Japanese word for dog, but the origin of the prefix “Shiba” is less clear. The word shiba means “brushwood” in Japanese, and refers to a type of tree or shrub whose leaves turn red in the fall. This leads some to believe that the Shiba was named with this in mind, either because the dogs were used to hunt in wild shrubs, or because the most common color of the Shiba Inu is a red color similar to that of the shrubs. However, in an old Nagano dialect, the word shiba also had the meaning of “small”, thus this might be a reference to the dog’s diminutive stature. Therefore, the Shiba Inu is sometimes translated as “Little Brushwood Dog”.

The Akita is a large spitz breed of dog originating from the mountainous northern regions of Japan. There are now two separate strains: American, a/k/a “Akita” or “American Akita”; and Japanese, aka “Akita Inu” or “Japanese Akita”. The American strain comes in all dog colors; however, the Japanese strain comes in selected colors only, with all other colors considered untypical of the breed. The Akita has a short double coat, similar to that of many other northern Spitz breeds, e.g., Siberian Husky, but long coated dogs can be found in many litters due to a recessive gene. The American strain of Akita is now considered a separate breed from the Japanese Akita in many countries around the world, with the notable exceptions of Australia (where there are no current breeders of the Japanese dog), the United States and Canada. In the U.S. and Canada, both strains are considered a single breed with differences in type rather than two separate breeds. During a short period, the American strain of Akita was known in some countries as the “Great Japanese Dog”. Both forms of Akita are probably best known worldwide from the true story of Hachik?, a loyal Akita dog who lived in Japan before World War II. The Akita is a strong, independent and dominant breed, commonly aloof with strangers but affectionate with family members. They are known to compete in many dog competition sports, yet some are known to be intolerant of other dogs and require a knowledgeable and firm handler. As a breed, Akitas are generally hardy, but they have been known to suffer from various genetic conditions and be sensitive to certain drugs.